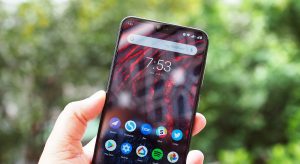 The Nokia 6 was the first Android device to feature Nokia branding, and it was one of the manufacturer’s best-selling devices last year.Nokia did a magnificent job optimizing the software to run on underpowered hardware during its Windows Phone days, which is why budget Lumia phones weren’t laggy. That system doesn’t work on Android though, and to its credit, HMD fixed a lot of the performance issues with the 2018 refresh of the Nokia 6, the Nokia 6.1 2018. The Nokia 6.1 2018 retained a similar design aesthetic but offered much more powerful hardware in the form of a Snapdragon 630.HMD is now rolling out a third model in the Nokia 6 series, the Nokia 6.1 Plus. The phone made its debut a few months ago in China as the Nokia X6, and is the first from HMD to sport a notched display. It isn’t just a larger verison of the Nokia 6.1 with a notch; the Nokia 6.1 Plus comes with an all-new glass design that makes it stand out in this segment, and the internal hardware has also received a boost. The phone is powered by a Snapdragon 636, and comes with 4GB of RAM and 64GB of storage as standard.

Colors are vibrant, viewing angles are excellent, and the phone doesn’t have any issues with sunlight legibility. There’s also a layer of Gorilla Glass 3 at the front and back to protect from tumbles, and the 2.5D curved front makes it easier to use the phone.The Plus moniker in the Nokia 6.1 Plus’ name is in reference to the larger 5.8-inch display. HMD went with a notched panel to maximize the screen real estate, and the 19:9 FHD+ screen is one of the best in this category.

It’s a good thing too, because the Nokia 6.1 Plus is one of the most slippery phones available today, and it managed to slide off flat surfaces no less than five times in just under a week. There wasn’t any damage aside from a minor dent on the frame, but if there’s ever a device that needs to be used with a case, it’s this one.The glass back doesn’t have a reflective pattern like the Honor 10 or the Huawei P20 Lite, and what the device is missing in design flourish it makes up in durability. There’s an aluminum frame sandwiching the glass front and back, and although the Nokia 6.1 Plus isn’t as durable as the standard model, it can still weather a few tumbles.

The 3060mAh battery also managed to deliver a day’s worth of use consistently. The phone offers Quick Charge 3.0, but the charger included in the case goes up to just 5V/2A. I averaged over five hours of screen-on-time over the course of a day, and while the phone doesn’t hold up to the likes of the Redmi Note 5 Pro in this area, it is more than enough to last an entire day.Powered by a Snapdragon 636, the Nokia 6.1 Plus is the most powerful budget phone HMD has launched to date. I didn’t notice any lag in the three weeks I used the phone, and the robust chipset coupled with 4GB of RAM is the sweet spot in this category.

there isn’t a brand that comes close to HMD in this regard. If you care about updates, picking up a HMD phone is a no-brainer.It’s business as usual on the software side of things. Like the rest of HMD’s portfolio, the Nokia 6.1 Plus runs Android One out of the box and comes with two years of platform updates and three years’ worth of security updates. The phone is currently on Android 8.1 Oreo, and HMD says it will deliver the Android 9.0 Pie update before the end of the year.

Rating By WorldTechnique: 4.5 out of 5 Star